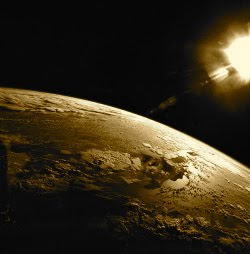 Paul D. Mooney- “There is a place you can go where the holy is holy and the real is real.”

For years I have been struggling to figure out why the right wing of the Apostolic movement acts the way they do, why they abstain from so much and why they are constantly agitating people to move their direction.

At a point in my life I could have easily been considered a liberal thinker Movies, secular music, jewelry, clothing, nothing was a big deal to me, as long as I could still feel the presence of Jehovah, I was fine; but there seemed to be something missing. I had always felt like there was something more that what I was living for, something more than what I was doing, but I didn't know how to address it.

I will spare you the entire story because I have previously written about my revelation of separation. Instead I will jump to the ending, there is a place in God that is unlike anything I had ever experienced, and it took me separating myself from the world before I found it.

I had been testing the separation thing out for about 5 months before things broke in my life. I was at a point where I needed an answer from the Lord, I knew I couldn't make it on my own without His guidance, so I called a few friends and we began to have prayer meeting.

The power of God fell in a miraculous way, and it fell quickly. (Now if you understand the ebb and flow of the Spirit, you will understand my next segment) I knew God had touched me, but also, I knew there wasn't the change I was looking for. “You can go home if you are tired, but I cannot, even though I have been touched, I haven't received what I came for.” No one left, and we began to pray again. The power of God fell like waves of fire. I can't explain it very well, its one of those things where you just had to have been there- and yes I said waves of fire.
Hours passed and the Lord has been moving and shaking us to the core. The Spirit began to ebb once more, right around midnight. As we all looked around at one another thinking about all the LORD had done, one of the young men spoke up, “I'm not done yet!” And he began to run around the church praising God. At this moment the Holy Ghost broke out and we reached a level that I had only heard about in stories. It was as if Jesus himself was walking among us! I know this sounds crazy, but you would have to have been there to believe it. It was so strong that another one of my friends said at the end, “We found Jesus! We found Jesus!” (That is not to say that we had not experienced Him before, but never to that degree)

***Slowly I am beginning to learn about a place where the supernatural resides, the realm of the miraculous, and it is a place that is sealed from those who choose to ride the fence, hidden from those whose hearts are wicked, and cannot be found by those who seek after it only. There is but one way to visit this place and that is to find Jesus, seek Him first, and then you will see His kingdom. Seek after the signs and wonders and the LORD calls you a perverse and wicked generation, you must seek after Jehovah. Don't base your walk with God on the miracles and signs, those mean very little. Don't worship the creation, but the creator. Don't worship life, but the life giver. If you truly seek Jesus, everything will be just as it should, its when you seek after the signs, you will get frustrated, but when you wait upon the Lord (wait as in waitress) you will renew your strength. ***

If I had known about this when I was younger, I would have most definitely changed my life much sooner than October 2010, but I cannot change the past, yet I can set my sails to change my future.
Labels: aljc america Apostolic ibc indiana bible college Oneness united pentecostal church upci