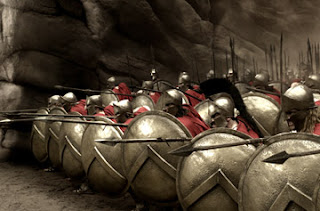 Finally, my brethren, be strong in the Lord, and in the power of his might. 11Put on the whole armour of God, that ye may be able to stand against the wiles of the devil. 12For we wrestle not against flesh and blood, but against principalities, against powers,against the rulers of the darkness of this world, against spiritual wickedness in high places. 13Wherefore take unto you the whole armour of God, that ye may be able to withstand in the evil day,and having done all, to stand. 14Stand therefore, having your loins girt about with truth, and having on the breastplate of righteousness; 15And your feet shod with the preparation of the gospel of peace; 16Above all, taking the shield of faith,wherewith ye shall be able to quench all the fiery darts of the wicked. 17And take the helmet of salvation, and the sword of the Spirit, which is the word of God: 18Praying always with all prayer and supplication in the Spirit, and watching thereunto with all perseverance and supplication for all saints; Ephesians 6:10-18
We as Christians are called to be soldiers, God equips us with what we need for battle according to Ephesians and Why we need the Whole Armour of God. We are not fighting in a physical battle of flesh and blood but in a spiritual battle against the powers of darkness, which is the devil and his angels. It is imperative that we have the whole armour and not just pieces of it so we don't leave ourselves venerable for the enemy to attack us. We need to be Spartans For Christ!!!
Preparation for war began very early in life for a Spartan boy. Upon birth elders inspected him and if judged unfit he was left to die. The child that survived this first test was then taken from his mother at the age of six and organized into companies where physical exercise, dancing and some reading and writing were undertaken. At eighteen Spartan boys were assigned to messes and spent their time hunting and practicing the martial arts. Though repugnant in modern eyes this callous system of training did produce well disciplined troops who fought as a team and who could withstand the hardships of an arduous campaign. The Spartans had the reputation of fielding the best hoplites in Greece during the Classical period. The Spartan hoplite was armed with a spear, shield and helmet and fought in close formation known as a phalanx. Each man depended on his neighbour whose shield helped partially to protect him when the hoplites stood shoulder to shoulder. Moreover, the Spartans organized themselves into platoons of men of similar age who were assigned different tasks in battle.
What our danger is, and what need to do is to put on is the whole armour, considering what sort of enemies we have to deal with—the devil and all the powers of darkness: For we wrestle not against flesh and blood, etc., v. 12. The combat for which we are to be prepared is not against ordinary human enemies, not barely against men compounded of flesh and blood, nor against our own corrupt natures singly considered, but against the several ranks of devils, who have a government which they exercise in this world. (1.) We have to do with a subtle enemy, an enemy who uses wiles and stratagems, as v. 11. He has a thousand ways of beguiling unstable souls: hence he is called a serpent for subtlety, an old serpent, experienced in the art and trade of tempting. (2.) He is a powerful enemy: Principalities, and powers, and rulers. They are numerous, they are vigorous; and rule in those heathen nations which are yet in darkness. The dark parts of the world are the seat of Satan’s empire. Yea, they are usurping princes over all men who are yet in a state of sin and ignorance. Satan’s is a kingdom of darkness; whereas Christ’s is a kingdom of light. (Matthew Henry Commentary)
We need to do as Spartans did in battle and prepare, train, and work together as a team to use the spiritual weapons God has given us to defeat Satan's empire.
Labels: aljc america Apostolic arkansas ibc indiana bible college Oneness united pentecostal church upci